The Catholic faith first came to the St. Joseph River region in the 1600's with the arrival of French explorers and the missionaries that accompanied them.  This was soon followed by the establishment of a trading post and mission at Fort St. Joseph.  As times changed, the French gave way to the English who in turn gave way to the Americans.  By the time the United States came into possession of the area, the fort and its mission were gone.

As settlers began to make their homes in this area, new missionaries arrived to assist the people with their spiritual needs.  From Belgium in 1832 came Fr. Louis de Seille.  Following Fr. Louis' death,  Fr. Stephen Badin served as a missionary in the region.  During Fr. Badin's time or perhaps Fr. Benjamin Petit's time, the brick church of St. Joseph was erected on this site in 1837, which took the place of an earlier log-built church building.

The diary of a German Missionary priest who visited Bertrand in the time prior to Fr. Sorin's arrival gives some rather colorful descriptions of the location and its people.  Speaking of his approach to Bertrand from South Bend, he relates,
Because the distance from St. Mary of the Lake to Bertrand only amounted to several miles, I set off on foot, breviary in one hand, my umbrella, which also served me as a sunshade, in the other. I had already passed the hill at the lake... and I was about to turn in an open woodland towards my destination, when I suddenly heard a far sounding, piercing whistle, which I recognized immediately in its peculiarity as the communication signal of the savages.
Had I been in a different region where pagan, really wild Indians lived, I would not have heard this whistle with total peace of mind but as something pernicious, because this characteristic Indian whistle, which sets the teeth on edge, is normally a signal to attack, at which they, in their cunning, suddenly fall upon their chosen human sacrifice and hand it over to their cannibalistic desires. This time I wasn’t in danger; the whistle surprised but didn’t frighten me. And when I looked back to where the piercing sounds came from, I noticed a tall, handsome Indian figure under a tree on the hill. I understood the Indian when he saddled a horse and indicated that I should use it.

The German missionary likewise tells of his encounter with Joseph and Madeline Bertrand and their family,
Mr. Bertrand’s wife is an Indian of the Potawatomi tribe, -- a good-hearted soul, who has been much refined through Christianity. She is the total opposite of her husband, who obtained considerable lands through her. The children of this marriage might have adopted the outer coat of civilization, but the traditional life in the woods shows everywhere through the modern city clothing.

Lastly, he describes celebrating Mass for the settlers and native people of the St. Joseph Mission,
During the Holy Sacrifice of the Mass, which I said before the sermon, I gave communion to the German Catholics and then to a great horde of Indians, who had been prepared for it the day before.
They had spruced themselves up for the spiritual wedding meal; their woolen blanket wraps were freshly washed, their shirts underneath were clean, all damages on the leggings and moccasins had been carefully repaired. Most of the men had colored scarves wrapped around their heads; the squaws pulled their woolen blankets, some of which were embroidered with artistic hem stitches, over their heads from their backs to their foreheads and held them together under their chins with their hands.
As fantastically as some of these Indians had adorned themselves, wrapping many decorations around them, not one of the curious people present in the church tried to laugh, because they could see at the same time the decency and respect with which the converted ‘savages’ were going to celebrate the mysteries of their holy religion. As they finally approached the communion rail at the altar and fell down on their knees to receive in the holy form of bread the highest Lord of Heaven and Earth, all people present, whatever their religion, were visibly touched. But I myself, who had to look directly into the face of the Indians, was deeply touched, so much that I could hardly hold the chalice.
At noon I ate with all the Germans, who had done their Easter duty in the morning with me at the same table, in the restaurant of a man from the black forest, Mister Mezger; it was a truly loving feast, as I had never experienced before.
(To view more of the Diary of this German Missionary, please visit: https://www3.nd.edu/~wcawley/corson/archivaltreasure.htm)

Fr. Sorin of the Congregation of the Holy Cross, and founder of Notre Dame University arrived on the scene in 1842 and he and his fellow Holy Cross priests served the mission at St. Joseph for many years.  Fr. Sorin donated the bell which called the local community to Mass and Eleanor Sherman, the wife of the Civil War general William T. Sherman, donated candlesticks for the altar.

The Sisters of the Holy Cross arrived in 1844 and in 1850 began the operation of St. Mary's Academy.  Since the bishop of Vincennes who oversaw the area of South Bend and Notre Dame was not interested in yet another Catholic educational institution at this point, Fr. Sorin arranged for the sisters to rent a house from Joseph Bertrand not far from the mission church.  Each Wednesday Fr. Sorin would come to Bertrand to hear confessions and would spend the night at a Bertrand boarding house and return home to Notre Dame the next morning.  Part of the original convent and school is now a private dwelling a short distance north of the Cemetery.  In 1855, property was obtained and permission was granted for the sisters to move to the current site of St. Mary's College in South Bend, Indiana.

Founded in 1837, St. Joseph Mission served the people of Bertrand until the the end of the century.  The land for the Mission and the surrounding graveyard were donated to the Church by Madeline Bertrand.  The small church building was abandoned and dilapidated by the early 20th century and was demolished in the year 1911.  An account from 1910 gives a brief description of the decaying structure:
All that remains of the smart little French town is the old church surrounded by its little colony of graves.  The doors hang on one hinge, the wooden narrow balcony with its winding stairway of little steps sags perilously.  One can scarce imagine the choir seated there.  The pulpit has been taken away and the great rough hewn logs is all that remains of the floor.  Yet over it all lingers the atmosphere of other days.  One recalls the death of Father Louis DeSeille, who in the little old log church dragged himself dying to the little altar where partaking of the last sacrament he descended the steps and died.  The story of the brave young priest, Father Petit, who followed his Indians in their banishment from Bertrand seems strangely real and one fancies the dusky forms of the Indians kneeling in the dim light from the vine covered window together with the sturdy settlers.
(The Fort Wayne Journal-Gazette, Sept. 11, 1910).

​Bricks of the original church building, formed of the clay of the St. Joseph River, can still be found scattered throughout the cemetery.
A number of Holy Cross Fathers served the Mission over the years.  These signatures are taken from the Liber Defunctorum (Death register) of St. Joseph Mission as found in St. Mary's Parish archives. 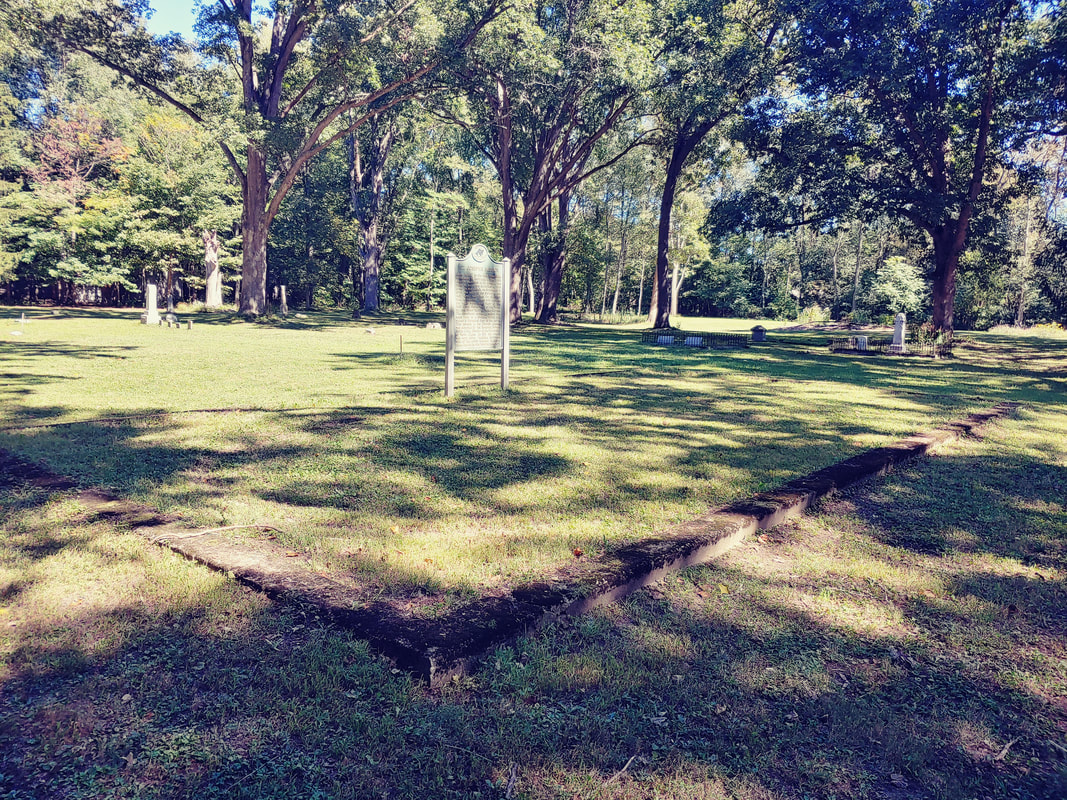 The concrete border marks the approximate outline of the original St. Joseph Mission church building.  The border was added at some point in the mid twentieth century. 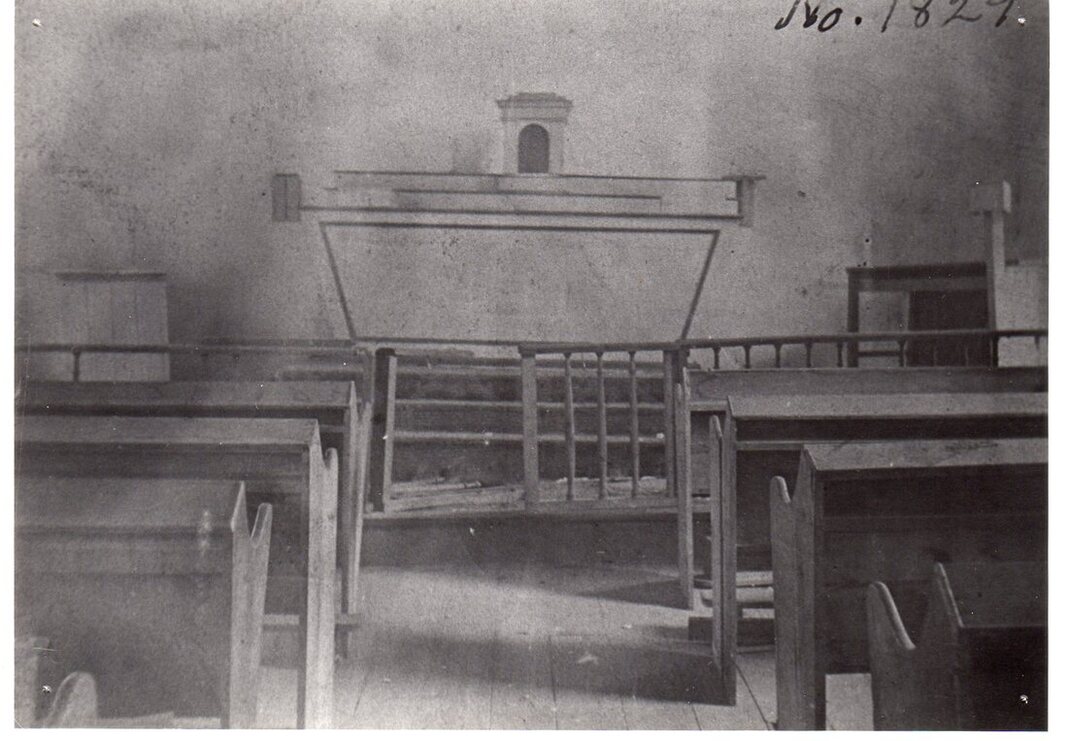 The only known image of the interior of St. Joseph Mission, apparently taken during the time the church was abandoned and falling into ruin. 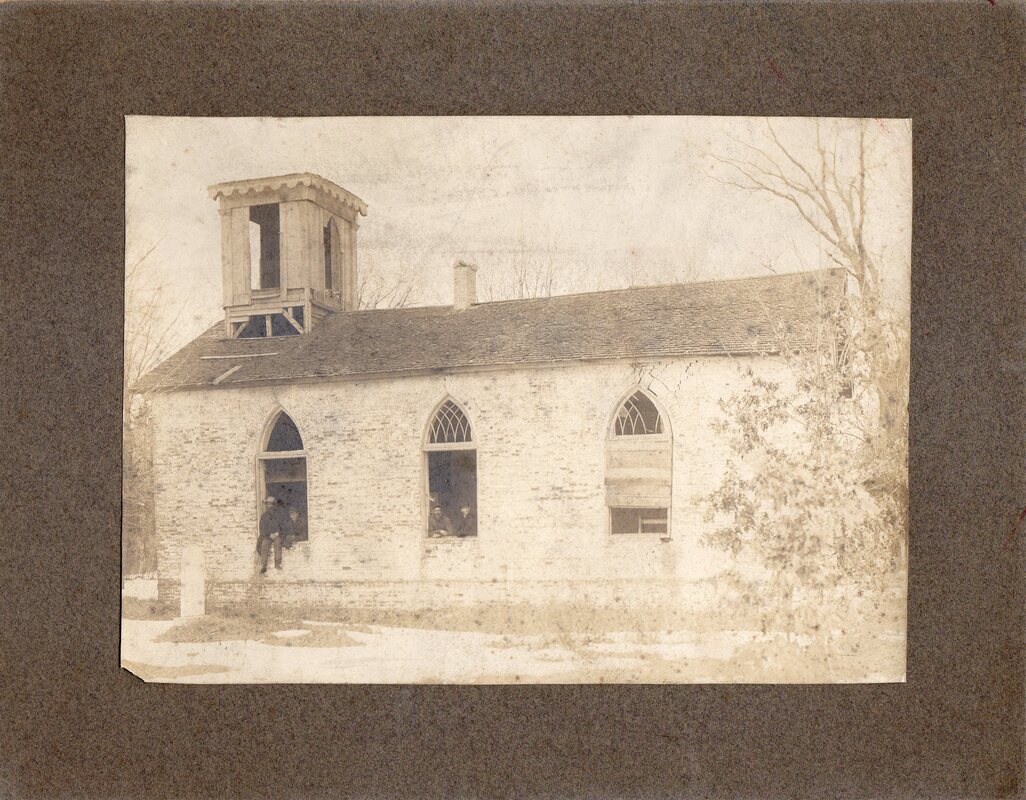 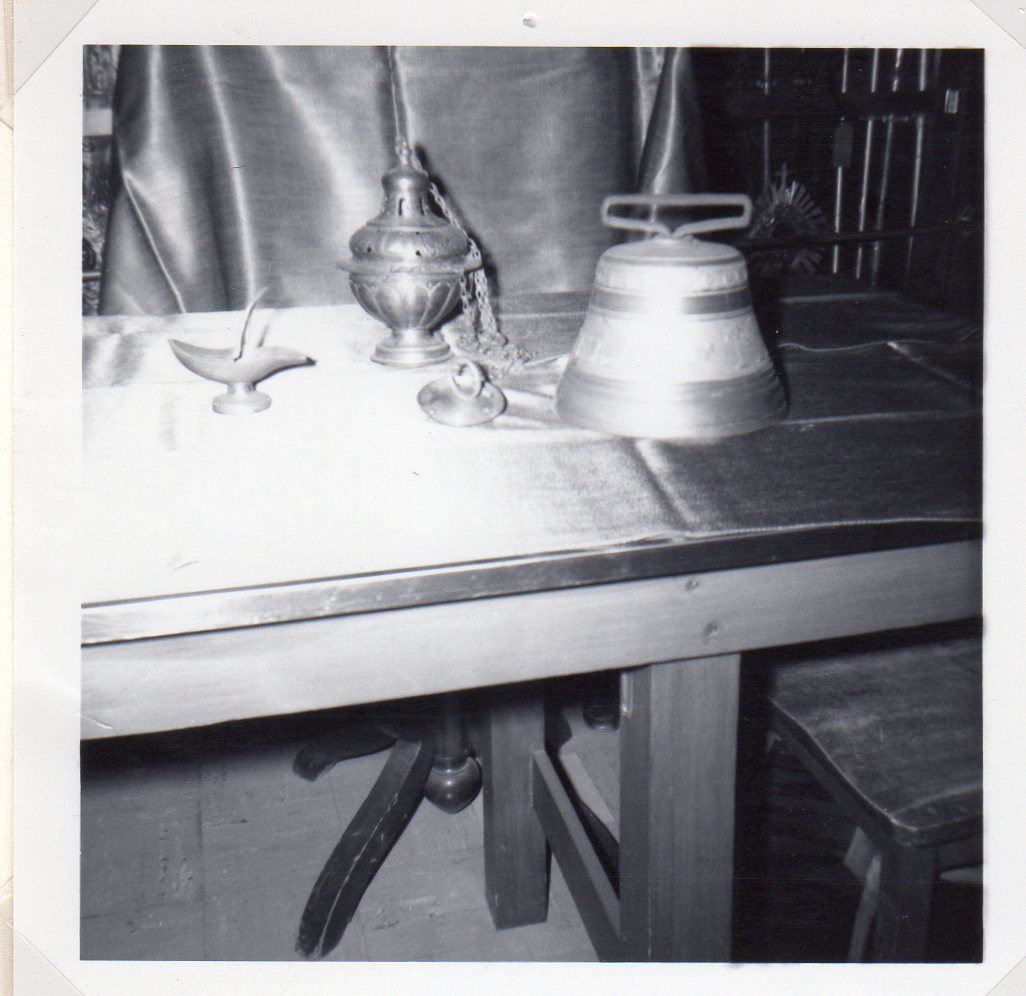 The thurible and bell from St. Joseph Mission. 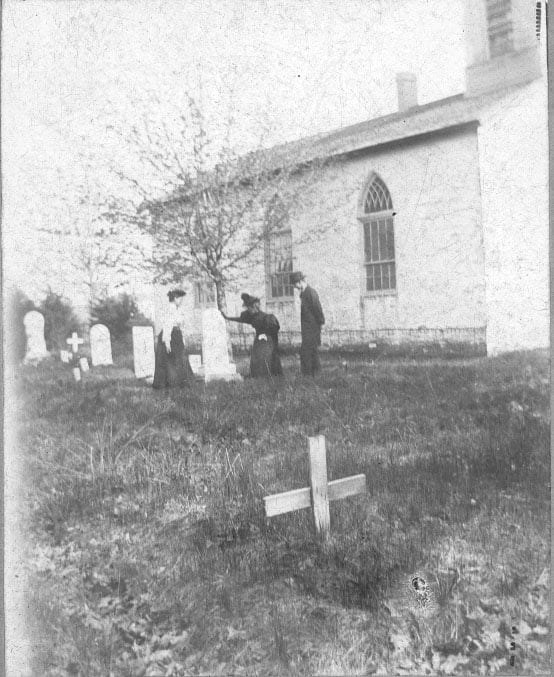 A Late 19th, early 20th century photo of the mission.  It is interesting that none of the tombstones in this image are still in existence... at least not in the location where they are situated in this photo.  The small wooden crosses would have decayed long ago.  Other stones were pushed over and may well have been put up in a different location.  Some may simply have been destroyed or fallen over and were gradually covered with earth.  I have probed in the area and did find a couple of bases, but no headstones.