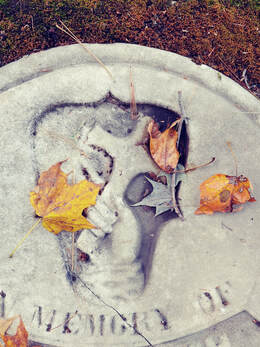 Where is Madeline Bertrand buried?  Madeline's grave can be found toward the North West corner of the cemetery (toward the river).  Her stone is flat and encased in concrete.

Madeline Bertrand is buried here, is Joseph here as well?  No, Joseph Bertrand remarried after Madeline's death and eventually moved to Kansas.

Why are some stones upright and others are flat?  All of the stones were upright at one point.  The ravages of time and vandalism has caused many of the stones to fall out of their bases.  In the 1960s an effort was made to preserve some of the stones by setting them horizontally in concrete.  This isn't considered the best way of preserving stones anymore, but at the time it served its purpose.

What are the small white stones next to many of the headstones?  In the 19th century many burials along with the headstone also had a footstone.  These smaller marble stones often featuring the initials of the deceased would mark the other end of the grave, so to speak.  They gradually were moved to be right next to the headstone, probably for ease of lawn care.

Who owns the property that the mission and cemetery are located on?  The property is owned by the Roman Catholic Diocese of Kalamazoo and is directly cared for by St. Mary's Parish, Niles, MI.

Can my loved ones or I be buried here? No.  There are numerous people who are recorded as being buried here but there is no stone marking their grave.  Oftentimes wooden markers were used as headstones and they either rotted away or were burned in brush fires and are now completely lost.  In addition to this fact, there are many, perhaps hundreds of Native Americans buried at this location and it simply was not in their tradition to mark their burials with a stone.  This means that there are  many more people in the ground than the stones would lead us to believe.  Also, it would be difficult to bring the heavy equipment needed for a modern burial (excavator, vault lift) into this area.  I have heard a story of a brush fire that got out of hand years ago and a fire truck was brought into the cemetery to assist putting it out, and it's wheel sank into a grave!  It is best to simply think of these grounds as a historical location, and not as an active cemetery.